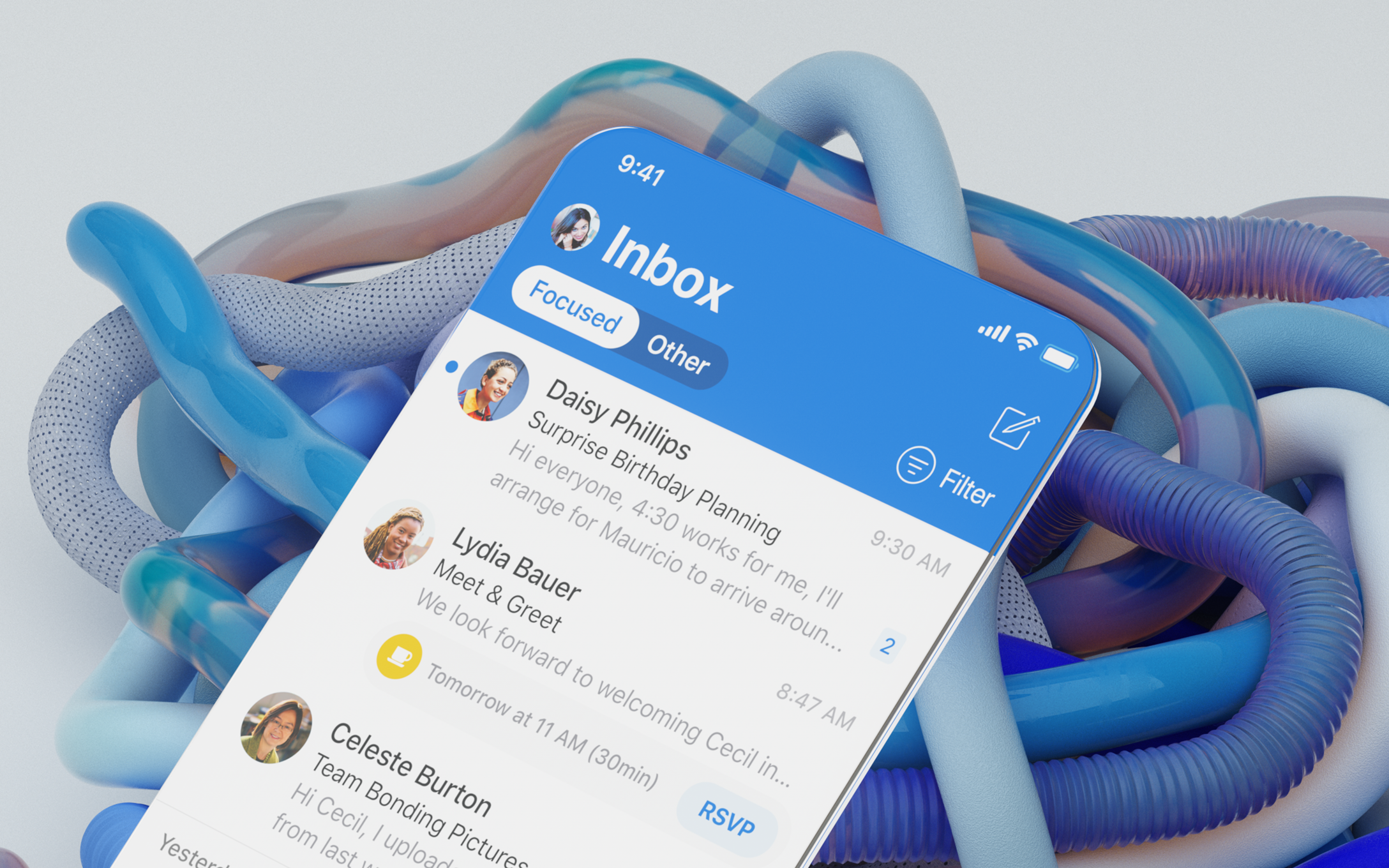 Product Designer on Outlook mobile, leading the design of multiple features across iOS and Android including a redesign of Outlook for iOS, Search, Swipe Actions, and In-App Purchases. I also owned and maintained the design system in Sketch, and contributed code to the native Outlook Android client.

I led a redesign of Outlook for iOS, Microsoft's flagship mobile app. The goal was a new design that could reinforce the Outlook brand while also feeling cohesive with the recently released iOS 11. We updated the navbar to introduce the synonymous blue color of Outlook, bolder typography, a more tangible focused/other switch, and an avatar that doubled as an affordance to the left-nav while also displaying account selection. The new navbar extended across the three hubs of the app—Mail, Search, and Calendar.

The success of the redesign led to it being used as the foundation of the new Microsoft Fluent mobile design system, influencing the identity of all of the Office suite of apps including Microsoft Teams, Excel, Word, Powerpoint, OneDrive, and more—an achievement I’m extremely proud of. 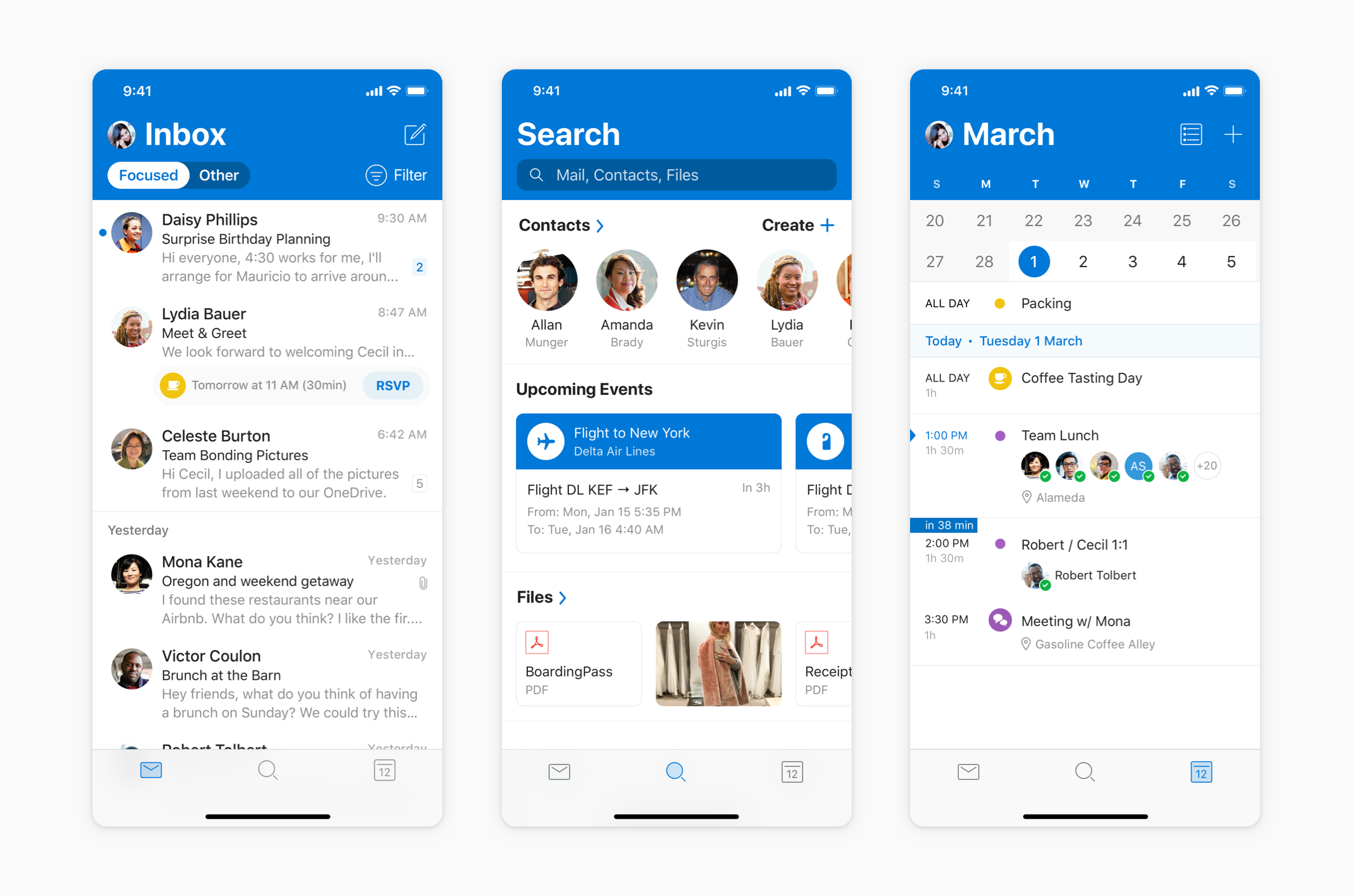 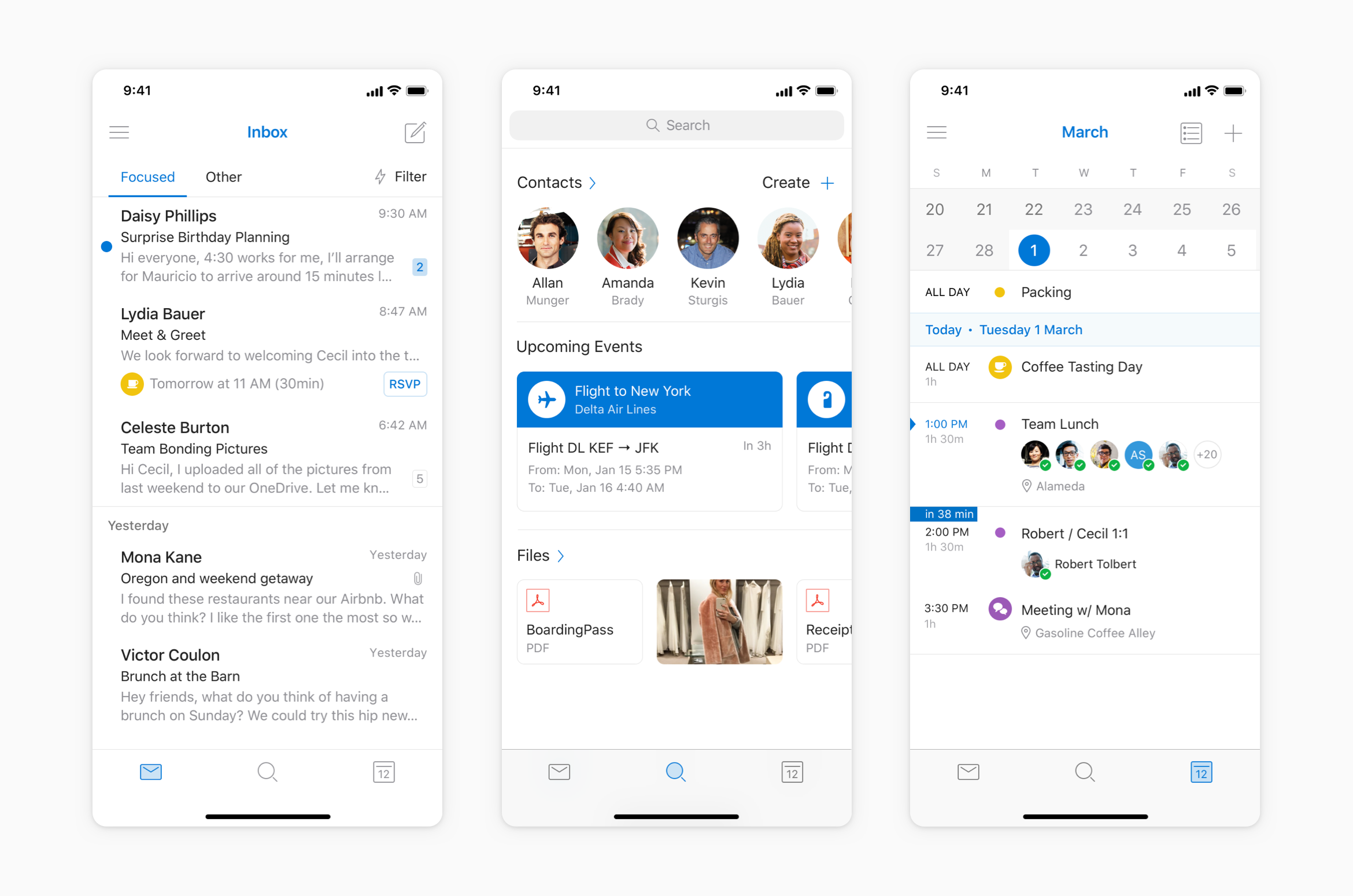 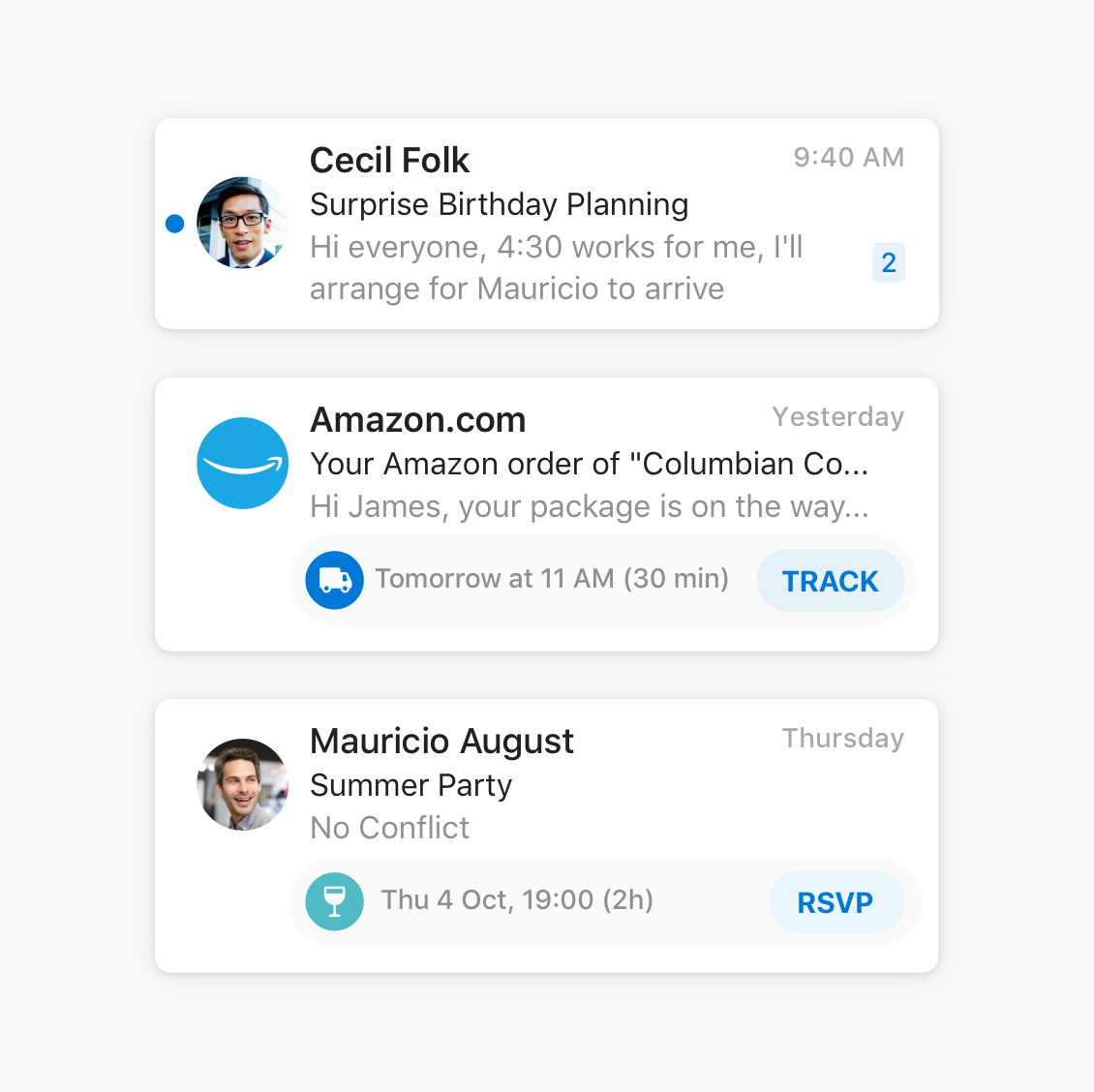 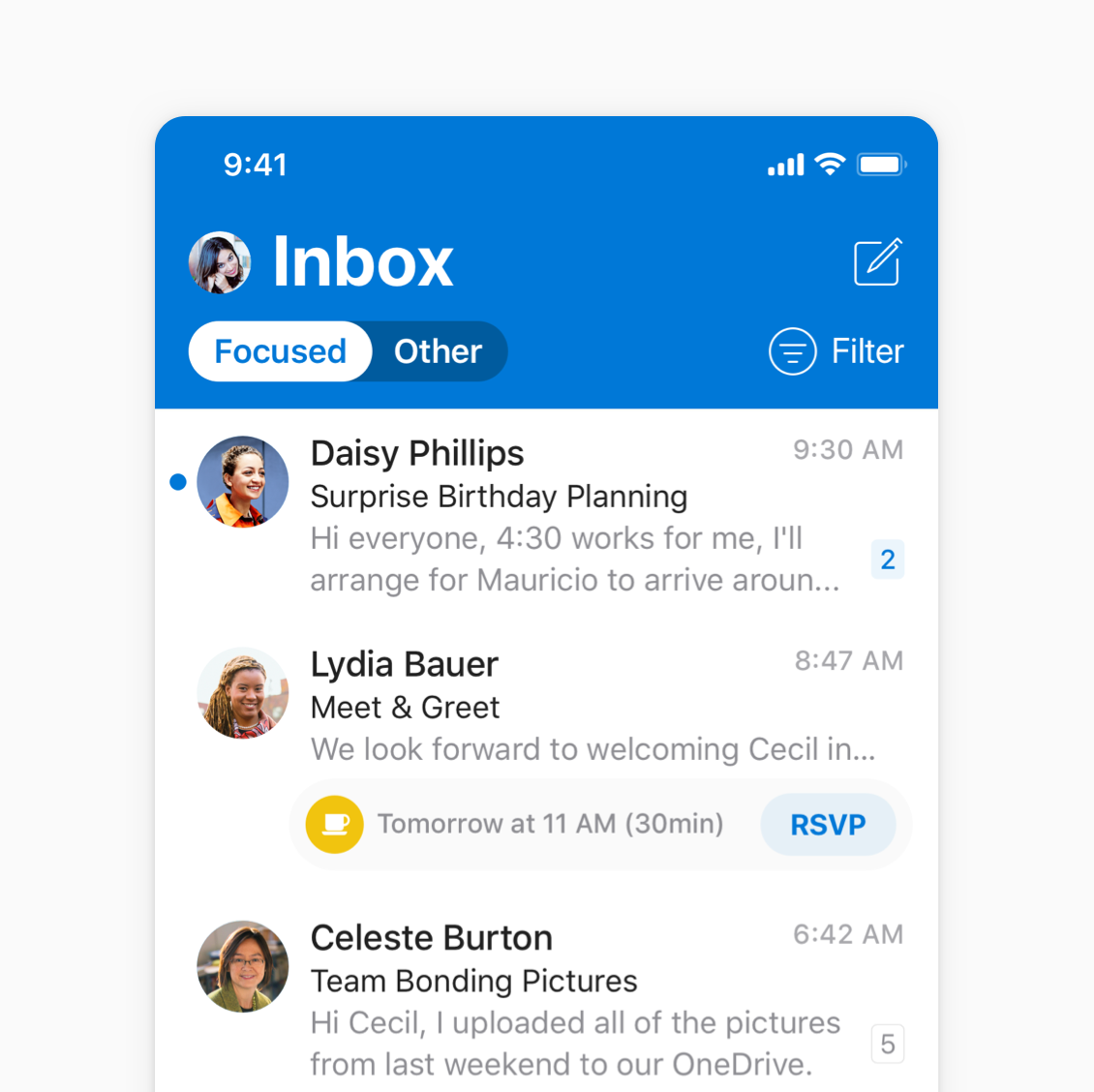 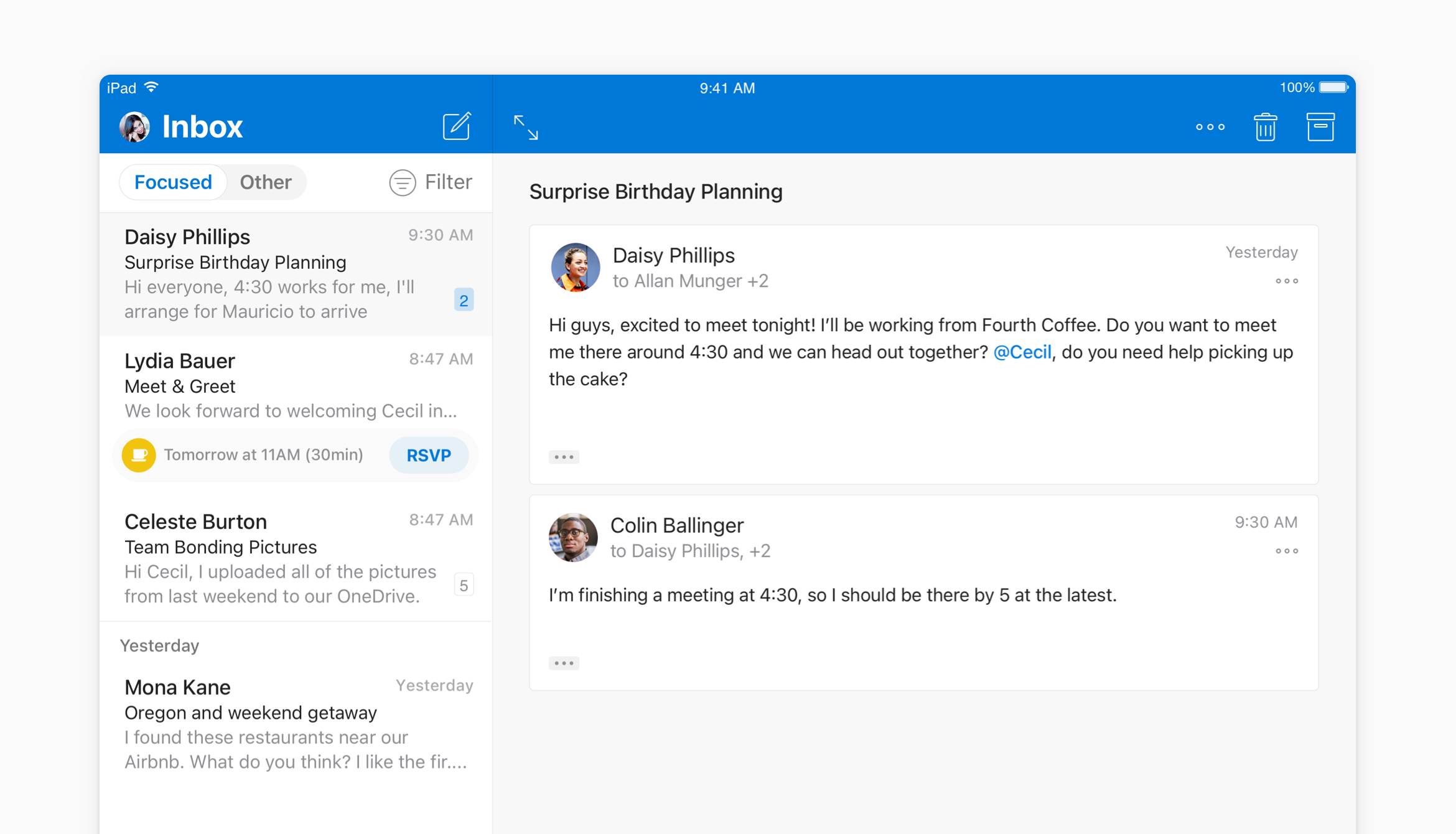 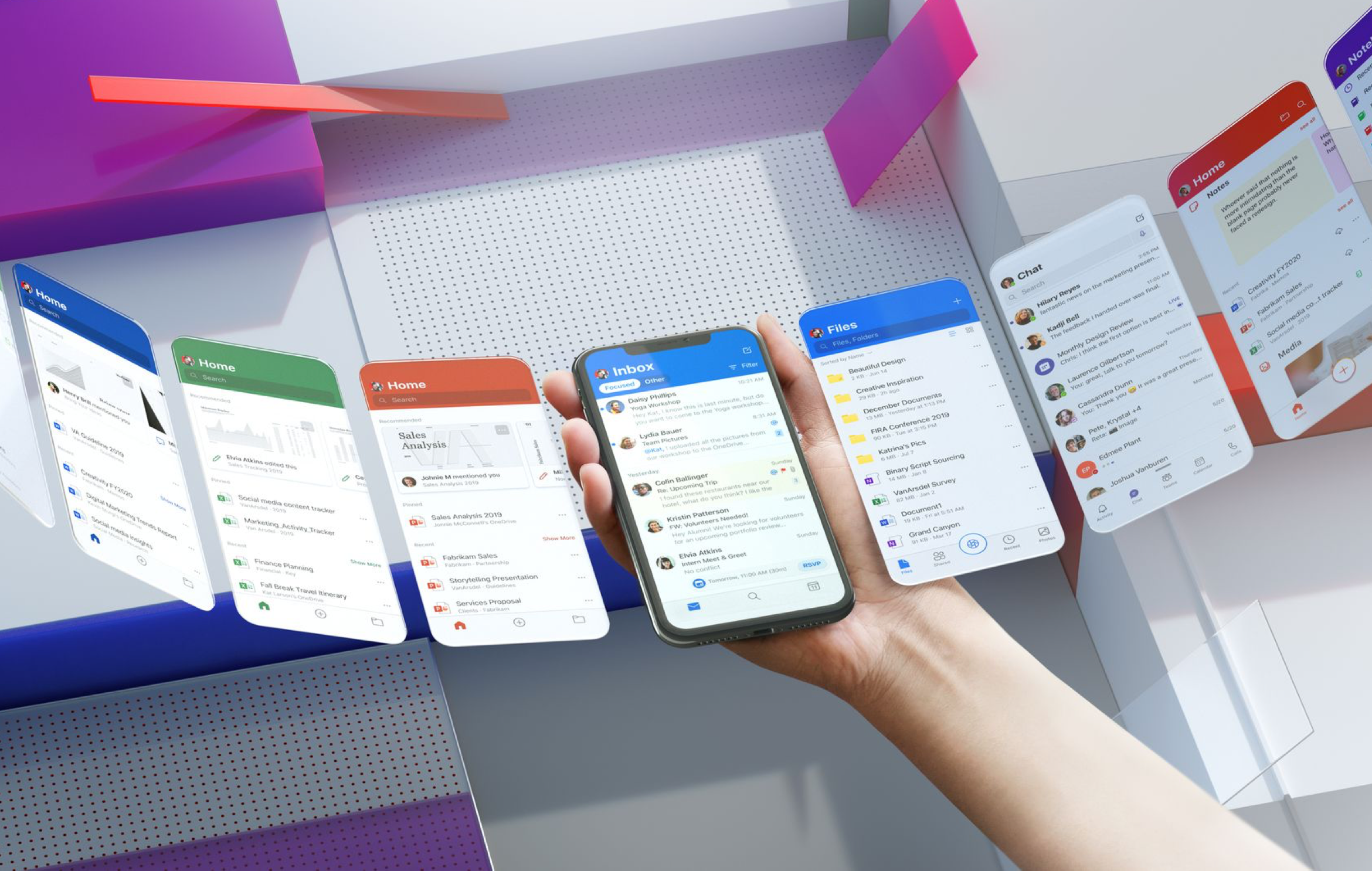 The goal with this project was to increase awareness and usage of the customizable swipe actions within Outlook, as research had shown that users who set up their own swipe actions used the feature more often, triaged their mailboxes more effectively, and retained as Outlook users for longer.

The solution was to replace the left swipe action with a swipe-to-customize experience that guided the user to the settings screen where they could quickly, and in context, set up their swipe preferences. We intentionally landed the user on the high level swipe settings screen so they had awareness both directions could be set.

We also took the opportunity to give the visuals a refresh, introducing rounded corners on the mail item that animated based on the distance of the swipe, subtle shadows that created depth and texture, and subtle haptic feedback when the action thresholds were met, all resulting in a meaningful and delightful moment for an otherwise tedious task. 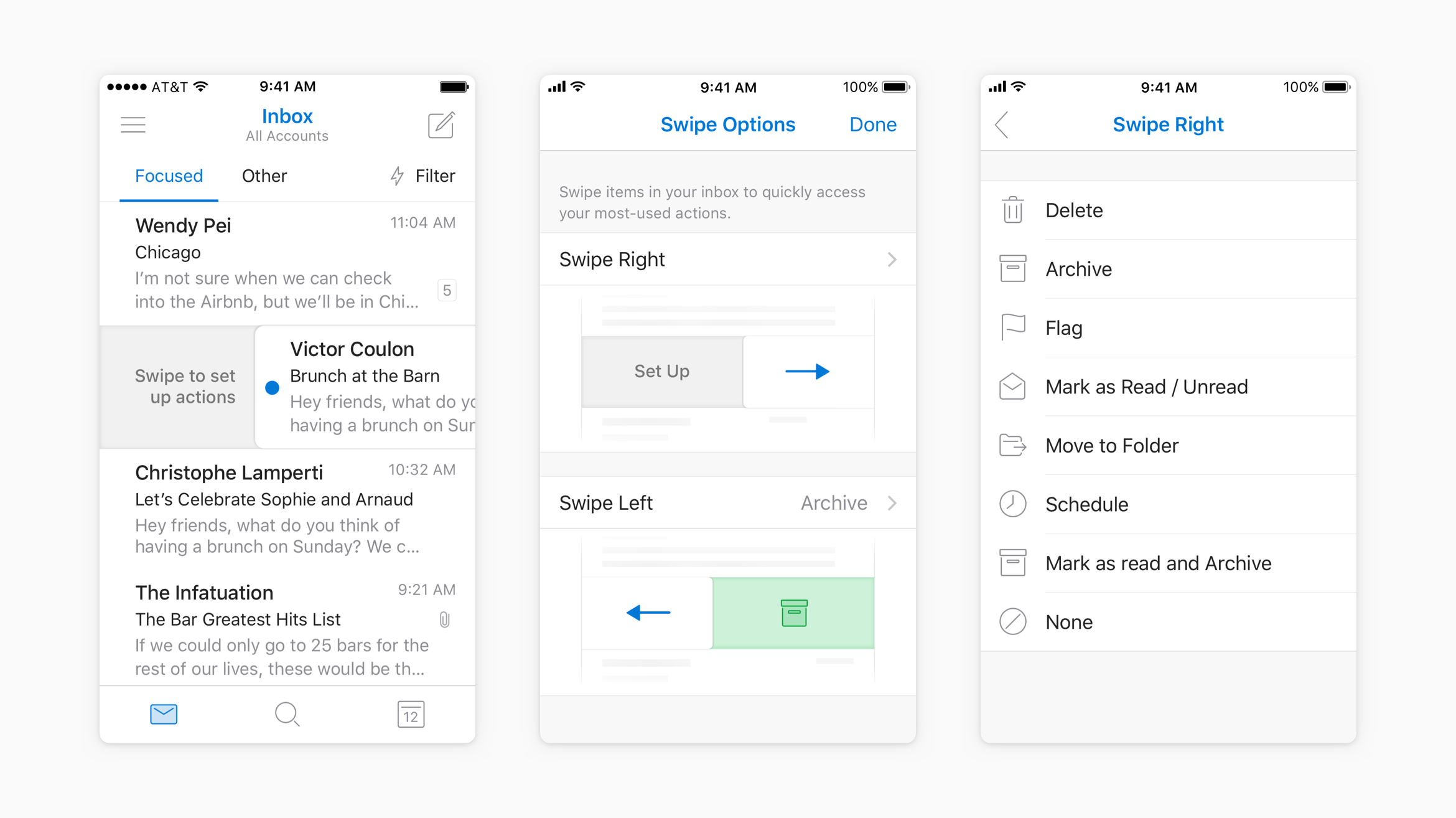 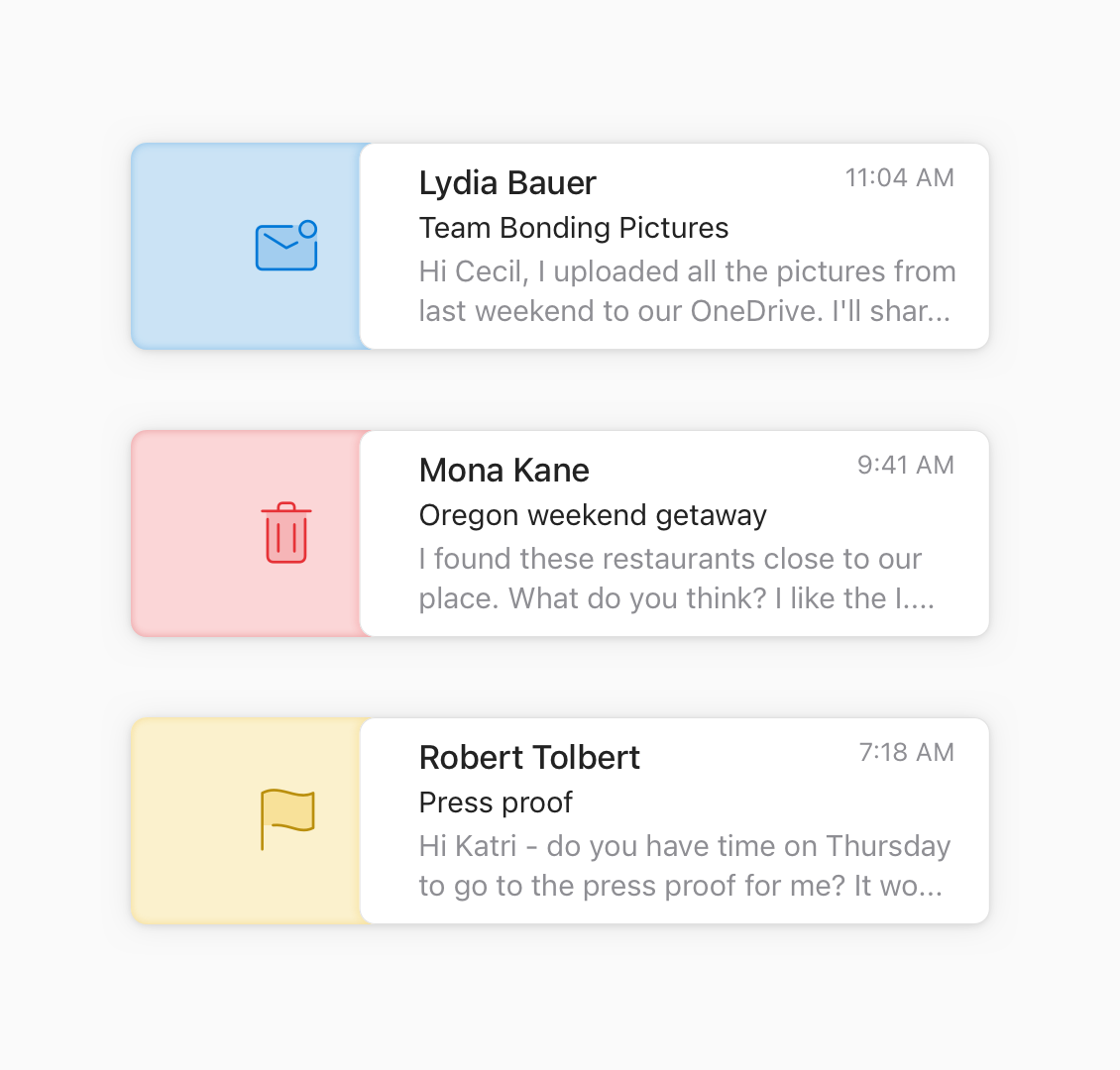 With my deep knowledge of Android design and development patterns I owned large parts of the Outlook for Android experience, and worked closely with partners to port over features that were initially ideated on other platforms.

One of these features was the "Zero Query" search experience for Android. This change placed search as more central part of the Outlook experience and leveraged Microsoft intelligence to proactively suggest relevant contacts and files, as well as showcasing upcoming events like flight and hotel reservations—all before the user needs to type out their query.

+ TechCrunch | Outlook’s mobile makeover includes a much smarter search.+ The Verge | Microsoft Outlook is getting new search and reply features on iOS and Android. 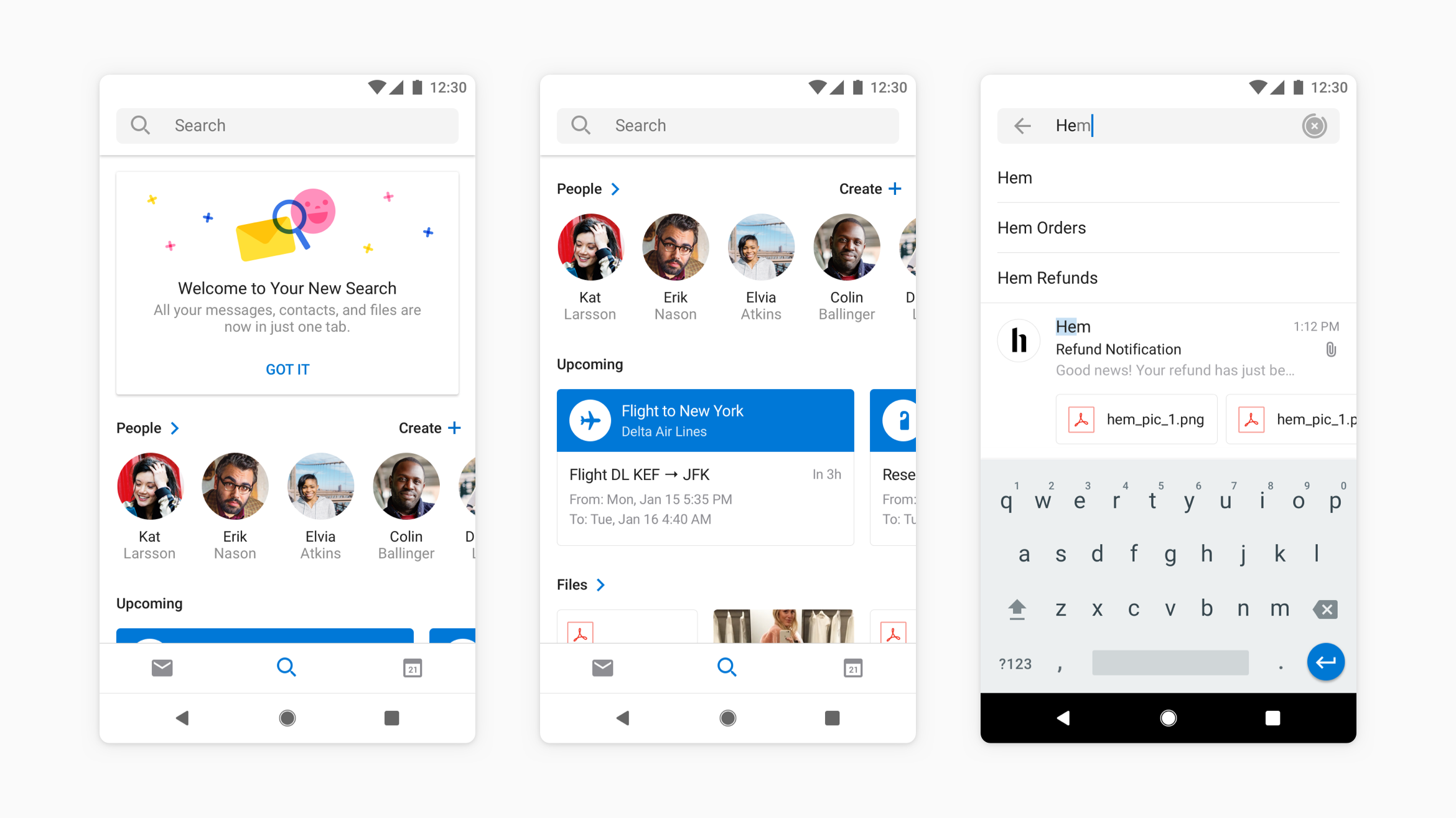 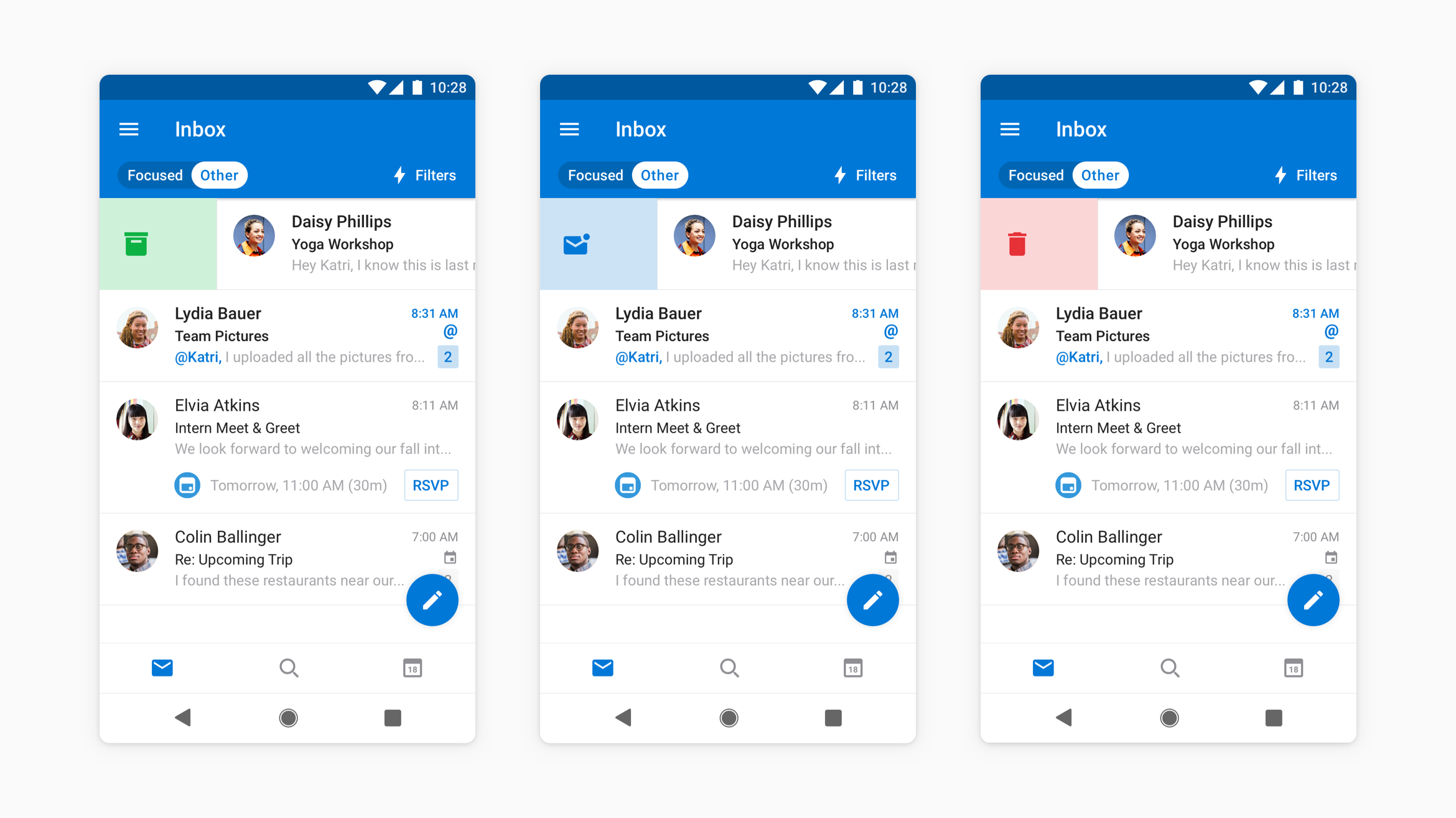 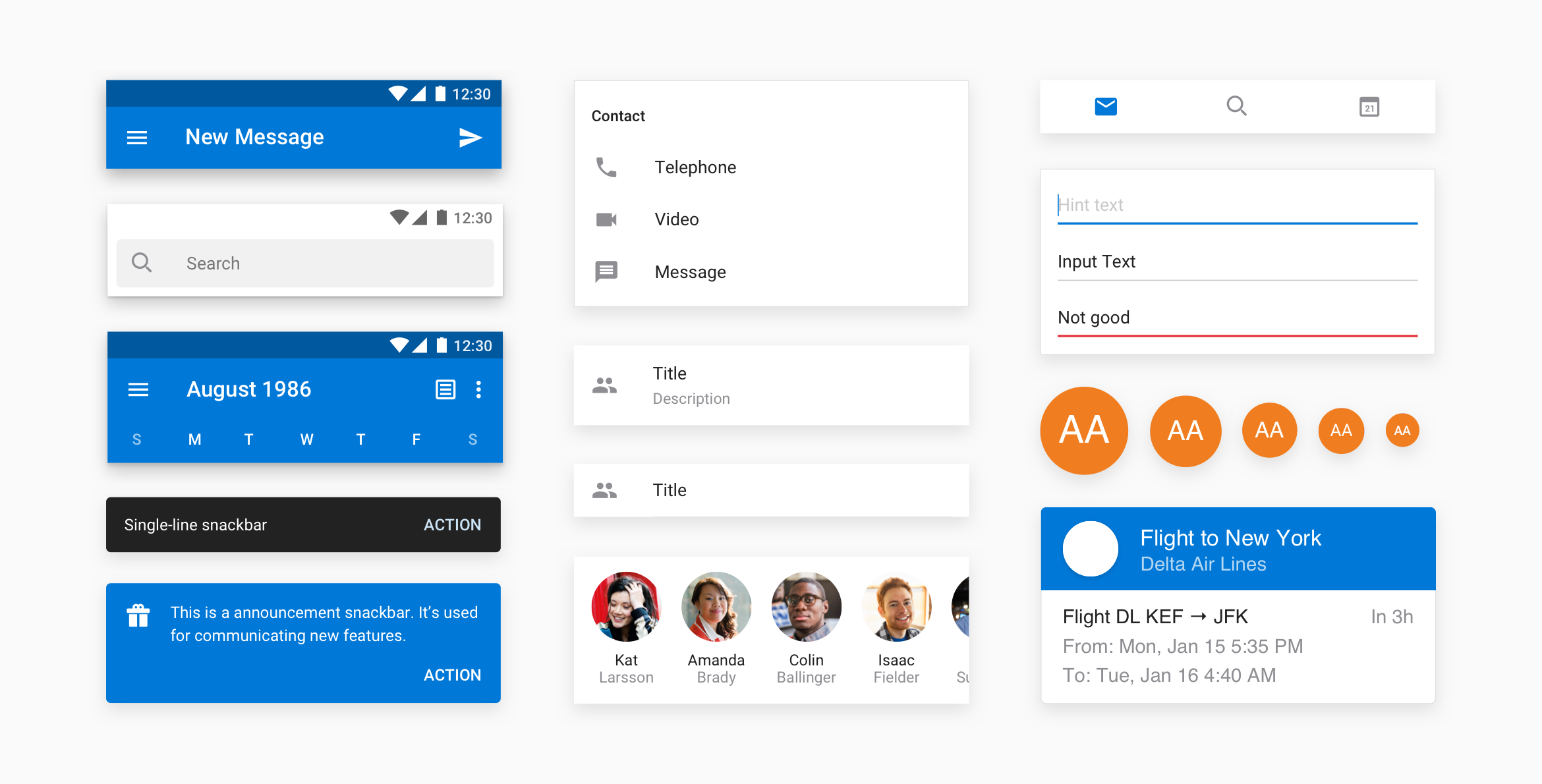 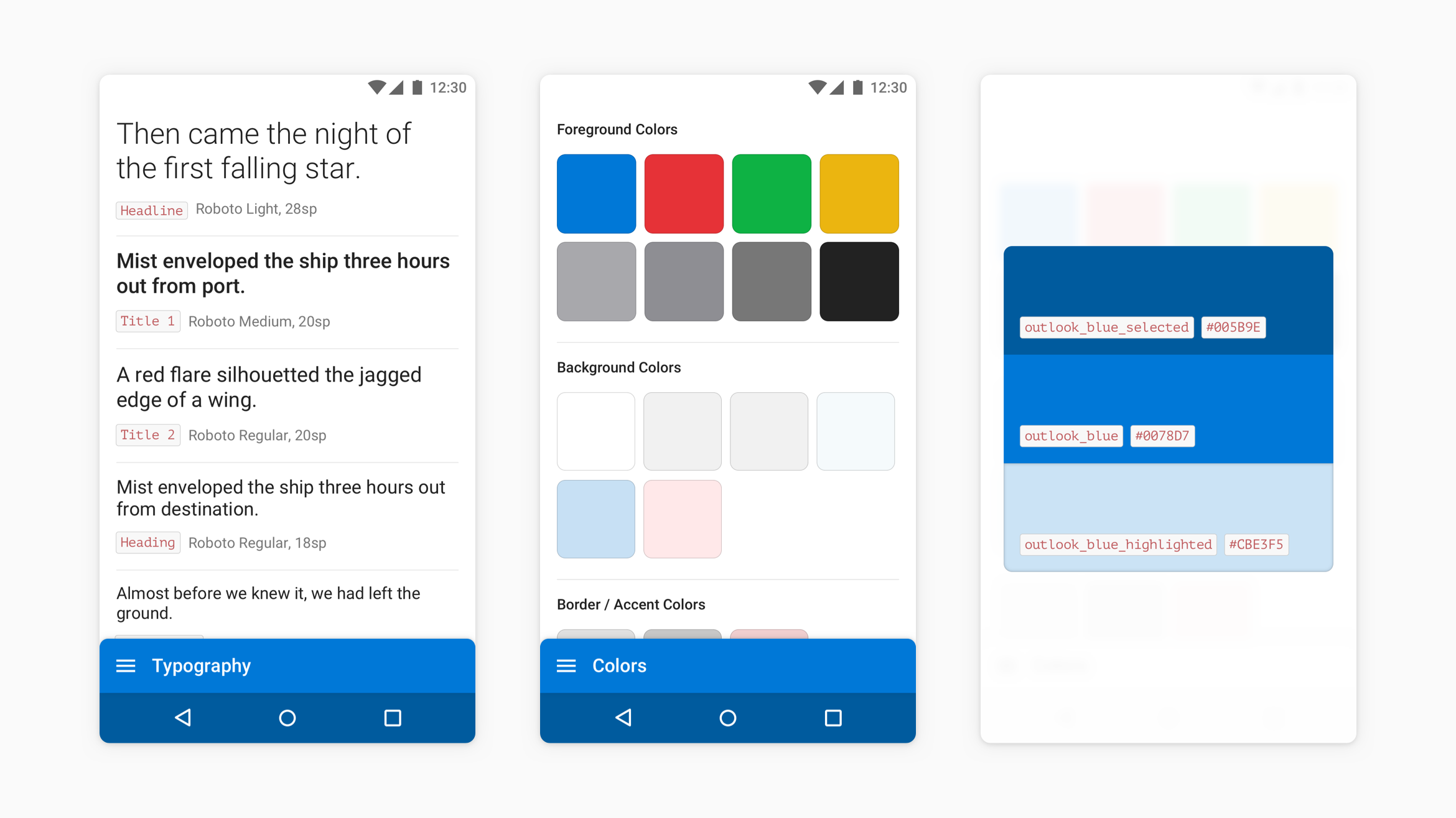